Breaking: Monsanto Forced Out of UK by Activists

It has been a truly rough week for Monsanto. After being slammed with a lawsuit by concerned farmers over their GMO crops and thrown out by China, now the corrupt juggernaut is being thrown out of the United Kingdom. In an unprecedented announcement, Monsanto announced a major departure from the UK due to “intense opposition” to genetically modified foods from activists.

As a result, the company is now closing its genetically modified wheat growing operation based in Cambridge. Monsanto officials even went on record stating that the move was a result of opposition against their own ‘Frankenstein Foods’. Furthermore, the company is even looking to liquidate their GMO crop facilities based in Germany, France, and the Czech Republic. Monsanto is making a run for it, and food good reason. Nations have been openly voicing their opposition against the biotech mammoth, with officials and individuals nationwide taking a stand. France is one of many nations to call out Monsanto’s crimes, citing health concerns among the many reasons to reject Monsanto’s GMO crops

Monsanto Thrown Out Across the Globe

India has also joined the conglomerate of nations directly opposed to the agricultural corruption brought upon by bloated biotechnology giant Monsanto, declaring legal action against the corporation for a crime dubbed ‘biopiracy‘. Peru even went as far as to pass a monumental 10 year ban on genetically modified foods.

It seems that the United States officials are among the few who still swear allegiance to Monsanto, even allowing their genetically engineered hormone RBGH to run rampant in the U.S. despite being banned in 27 nations. Shockingly, the synthetic hormone (RBGH) is actually created using molecules and DNA sequences that are a result of molecular cloning. Are U.S. officials truly convinced that Monsanto’s GMO crops are truly safe, or does it have to do with the fact that many Monsanto employees are at the heart of the U.S. government?

Decide for yourself — click the image below to see the relationship between Monsanto and the U.S. government: 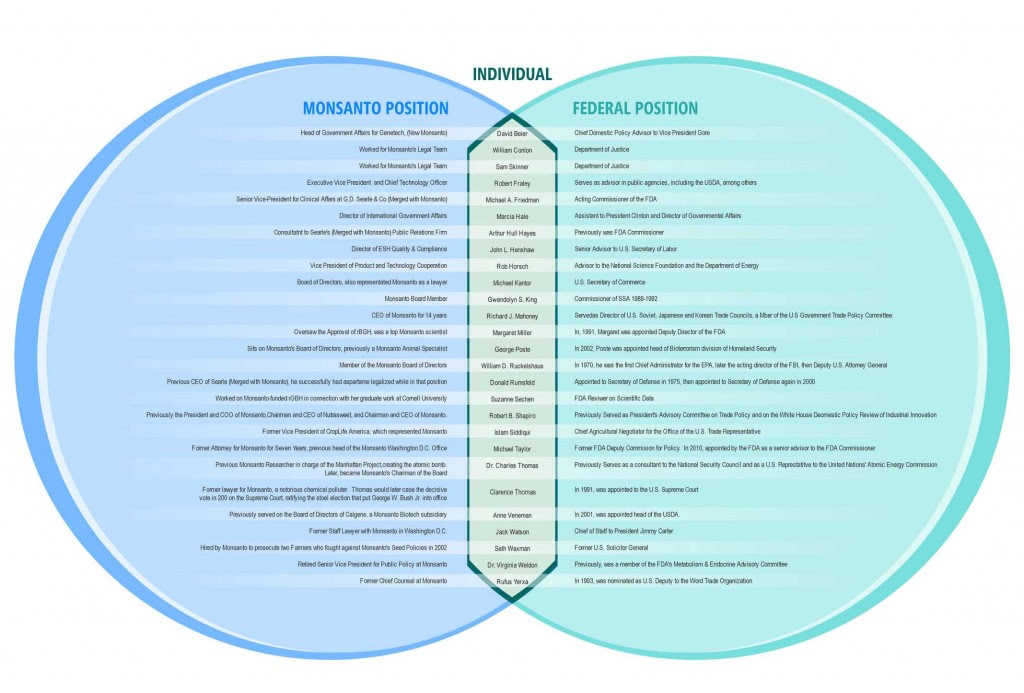 SOURCE
Posted by Vic at 8:18 AM No comments:

Vandana Shiva - The Future of Food and Seed

Welcome to Naturally to your door!

We think this is awesome!